What a difference an Archadeck of Austin porch cover can make!

Ah, the sun, glorious sun! When we feel chilly, sunlight warms the skin and thaws the chilly spots. But when we’re already warm … that big Texas sunshine can be downright uncomfortable. Escape is all we can think of. A sun umbrella? Not big enough. A porch roof? Aha! That’s the ticket. A new porch cover built by Archadeck of Austin? The best!

Archadeck of Austin was able to help these North Austin homeowners reclaim their backyard patio. The family enjoyed using their backyard pool, but the adjoining patio, uncovered, seemed to be a magnet for blistering sunshine that made sitting outside unbearable. They wanted to turn their unusable patio into an area where they could relax outdoors without being driven inside by the hot sun. A new porch roof would provide the comfort they craved.

The homeowners first met with Archadeck of Austin a year ago. In terms of ideas, they were ready to proceed with a covered patio/porch project, but their budget was not. They estimated they would be ready in early 2017. Fortunately, they were able to start a little sooner; they called us back in December 2016, ready to roll. 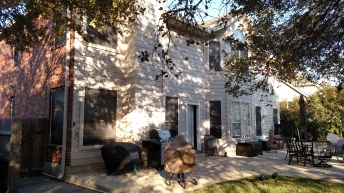 Our first task was to repair a large crack in the existing concrete patio. We cut out that portion of the concrete and filled it back in, and at the same time we added two more feet to the patio’s depth. The patio is now 24′ x 14′ — more space for outdoor living! While we were working with the concrete, we added a conduit so the homeowner could hook up his gas line with a flex line to grill out beyond the patio. That’s a convenience he will appreciate for years to come. Of course, the concrete cut-out/replacement and the additional square footage blend in seamlessly with the original patio surface. 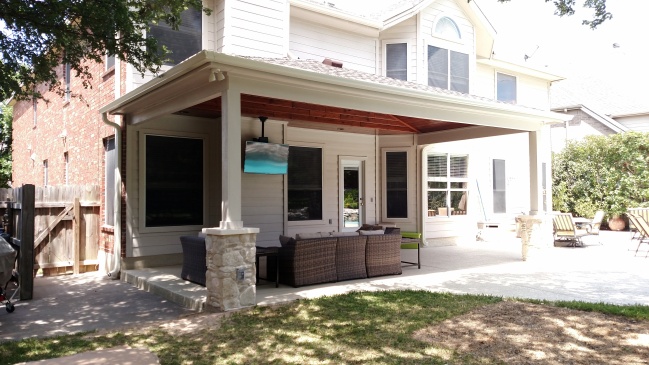 After repairing and enlarging the patio, we were ready to build the all-important porch roof. The addition of a roof is what changes this area from a simple patio into a porch — and into a new-and-improved outdoor living space. We were able to match the style and color of the home’s existing shingles so it all blends nicely.

Under the roof is a vaulted ceiling made of beautiful Synergy Wood, hand-stained and prefinished wood with warm, rich tones.  At the back of the porch, a ridge wall and flat ceiling/soffit, also built with Synergy Wood, provide a handsome transition from the painted porch wall to the vaulted wood ceiling. We added a full electrical package with a ceiling fan and built-in recessed lighting, and the homeowner mounted a flat-screen TV along the back wall. In the soffit area, we made sure to place the recessed lighting behind the TV so the images on the screen are not diluted when lights are on and the television is in use. 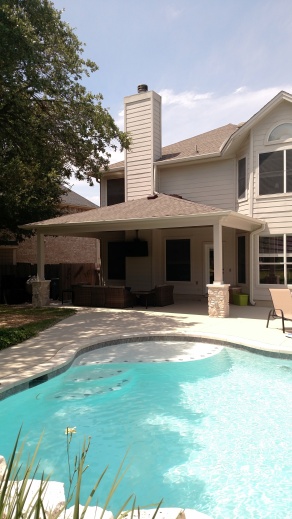 While the back of the porch roof is tied into the home, the front rests on Hardie-wrapped beams and columns, which we painted to match the home. We added stone coping at the bottom of the columns to match what had been used around the hot tub and pool.

At the very end of the project, Sundek (the company that originally surfaced the home’s concrete pool surround) applied a cool-coat finish to the concrete. This finish provides a comfortable walking surface for bare feet by reducing heat build-up. It’s cooler than regular concrete, brick or tile, and it’s slip resistant, too!

The homeowners added comfy porch furniture and, voila! They have a comfortable, inviting covered porch enhanced by a ceiling fan, lights and TV. Gone is the blistering heat of the uncovered patio, a place no one wanted to be! They love, love, love their new outdoor living space and look forward to spending many relaxing hours there.

If you would like to learn more about turning your patio into a porch fitted out for relaxing and entertaining, or about combining a porch and patio with other outdoor living structures, contact Archadeck of Austin today at (512) 259-8282 or via email at jim.odom@archadeck.net to schedule a free design consultation.