Archadeck of Austin asks: Are you ready to drive home a new deck?

Replacing a deck at your northwest Austin home can be somewhat like getting a new car. Your old one seemed fine; you have a history together and you’ve overlooked its quirks. However, as soon as you step into the new one – wow! The difference is astonishing, and now you can see what you’ve been missing.

That comparison comes to mind when you see the before and after pictures of this large outdoor living project that Archadeck of Austin recently completed in the Cat Mountain North area. The original deck was split into two levels overlooking the back yard and swimming pool. The homeowners had decorated each level attractively with potted plants, and overall the space had a comfortable appeal. The deck was “fine” over the years, but there were three problems with it that we were able to address when we designed the replacement deck. 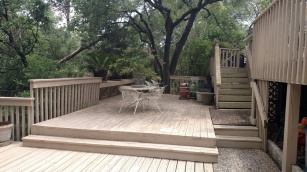 First, neither of the two deck levels was quite large enough. The two separate spaces were a little cramped and not conducive to entertaining or sitting and visiting with family. The homeowners weren’t able to move furniture around easily or add more chairs for a larger group.

Second, the wooden railing of the original deck actually obscured the view of anyone seated on the deck — and also obscured the view of those looking out through the house’s many windows. The pickets, or balusters, were thick at 2×2″, and there was a 6″ horizontal board along the top of the railing, just at eye level for a seated person.

Third, the homeowners were ready to switch from natural wood decking boards (theirs were cedar) to a synthetic composite material. After years of performing deck maintenance, they welcomed the idea of a low-maintenance deck. The composite materials on the market today are as attractive as wood but require less upkeep; at the time when the existing deck was built, fewer options were available.

Premier deck builder Archadeck of Austin drafted a large, sweeping deck design that combined the two levels into one to achieve a much larger usable deck space – almost 1,400 sq. feet. The angled shape of one side of the deck was designed to clear the root zone of a nearby live oak to ensure the deck will not impact health of the tree’s root system.

The tree’s Critical Root Zone (CRZ) is calculated by a formula, and the CRZ is indicated on the engineer’s drawing by three concentric circles around the tree. The innermost circle indicates the first quarter of the CRZ. Within that inner circle, the new deck construction cannot impact the soil in any way. Between the first and second circles, called the second quarter zone, the new deck construction can impact the soil up to 4″ deep, but no deeper. Finally, between the second circle and the outermost circle, another formula determines the depth of soil impact allowed. As you can tell from the drawing, every inch of the Critical Root Zone was mapped out in the design of the new deck.

Because the entire deck structure needed to be replaced, including the footings and support beams, we performed a huge amount of demolition before we could install the new materials.

The homeowners selected AZEK, a cellular PVC decking product, for their new decking material. To complement the Autumn Chestnut color deck boards, they selected a Solutions aluminum railing system in bronze. What a difference! The new railings and pickets are darker and thinner, allowing a clean view from the deck and from within the house. The Solutions aluminum railing is an excellent choice for another reason: it will never rust and has a lifetime warranty (as opposed to a 15-year warranty for steel).

This extensive outdoor living project included these elements as well: 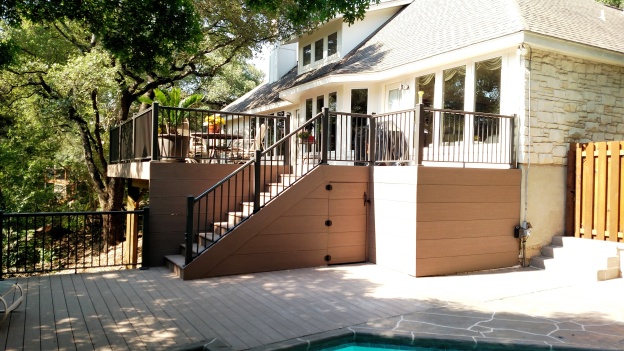 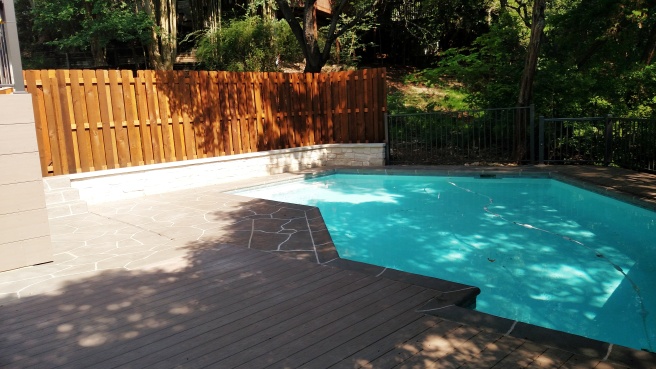 Is it time for a deck replacement at your house? If you are ready to explore ideas for redesigning your outdoor living space, contact Archadeck of Austin today at (512) 259-8282 or via email at jim.odom@archadeck.net to schedule a free design consultation.

Have you wondered what it would be like to have an outdoor living space that was designed to cater to your every outdoor living need? For instance, having the perfect spot for outdoor dining, a respite where the views exceed your expectations on a daily basis or an oasis that is as functional as it is beautiful, day or night? This is exactly what these Austin, TX, homeowner’s got when they hired Archadeck of Austin to design and build their elevated deck and porch.

This spacious outdoor living space consists of an elevated, 2nd story low-maintenance deck and covered porch area with all the trimmings! The deck was built using Fiberon Horizons decking in Tudor Brown. Horizon decking is capped (or covered) on all four sides with a patent-pending PermaTech® surface material. Four-side capping increases durability, enhances stain and fade resistance, and ensures a more polished appearance all around. Plus, Horizon decking features two different wood grain patterns on the top and bottom to add more character to your deck design with less on-the-job waste. In addition, Fiberon decking requires no sanding, staining or sealing , ever. This means less worry over maintenance and more time to enjoy the finer things in life!

The beautiful deck is accented with custom-designed and constructed horizontal tubular railing that has been powder-coated black. Atop the railing, and expanding the entire perimeter of the space, Archadeck of Austin installed a double composite cap offset within with a super strong fabricated steel plate to prevent climbing on the railing. In addition to the safety factor, the double cap also serves as a luxurious bar area to use as a drink ledge measuring out to 11″, and is even large enough, standing at 42″, to pull up a bar stool and double as a impromptu spot for dining, conversation or enjoying a beverage while taking in breathtaking views of Austin proper.

We took the abundance of custom features a step further by designing and building integrated bistro-style seating out of the same composite used on the deck around the cedar posts of the covered porch portion of the space. We even designed a built-in bench for additional seating when entertaining friends and family. Last cut certainly not least, this outdoor living space picks up where other designs leave as an afterthought — evening enjoyment! The entire space is loaded with romantic LED outdoor lighting to aid in utilizing the space to its fullest potential in the evening, and creating ambiance.

These Austin homeowners are elated with their new space. They view it as an all-inclusive escape that is close as just a few steps out the door! With everlasting views of the beautiful Cat Mountain, the backdrop to outdoor living enjoyment knows no end — literally.

If you are interested in learning more about creating a slice of Heaven in your backyard too, contact Archadeck of Austin to schedule a consultation today at (512) 259 – 8282 or via email at jim.odom@archadeck.net.

You can see more images of this project and many more of our stunning outdoor living designs by visiting our extensive galleries on Houzz.