New deck in NW Austin gives new life to porch cover, thanks to Archadeck of Austin

To borrow from Forrest Gump, a deck replacement can be “like a box of chocolates. You never know what you’re gonna get.”

When this NW Austin homeowner hired Archadeck of Austin to replace her existing wood deck, she didn’t know that her porch cover was in need of shoring up. In the process of removing the old deck, we discovered that the porch cover was no longer structurally sound. The beam that was holding it up was not strong enough to support the roof load it was carrying. See a picture of the deck and porch cover before we began the project below:

Since being advised prior to ordering the materials that she should fix the porch at the same time as the deck we included the materials needed as part of the total work order.

We conferred with the homeowner about this issue because replacing that beam and adding new support posts were tasks not included in the scope of our project. The homeowner agreed that replacing the porch roof’s support structure — while we were already in the same spot building a new deck — was a good idea. This was definitely a safety issue.

Now the homeowner has a sweet new deck with a sturdy and well-supported porch cover. For the new deck construction, she selected low-maintenance AZEK composite decking in Mahogany. Notice the deck board at the end, the way it runs perpendicular to the other boards. This is called picture framing, a method Archadeck of Austin uses now on most of our composite and PVC decks. 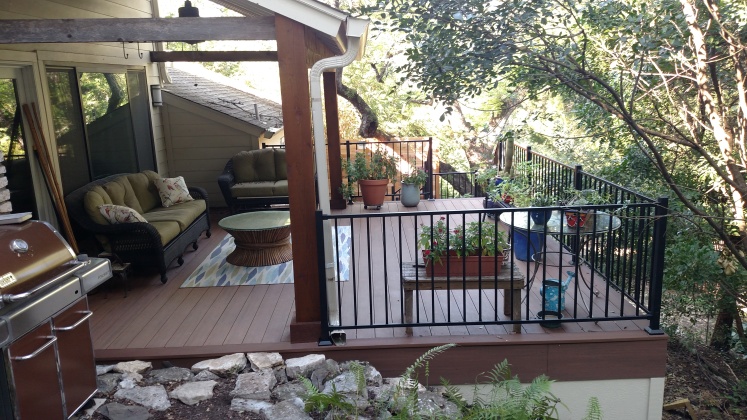 Picture framing allows us to provide a nice, clean, finished edge around the deck perimeter. It creates an even edge for the fascia and deck boards so debris and dirt won’t accumulate between those components. That kind of debris accumulation can rot the substructure. 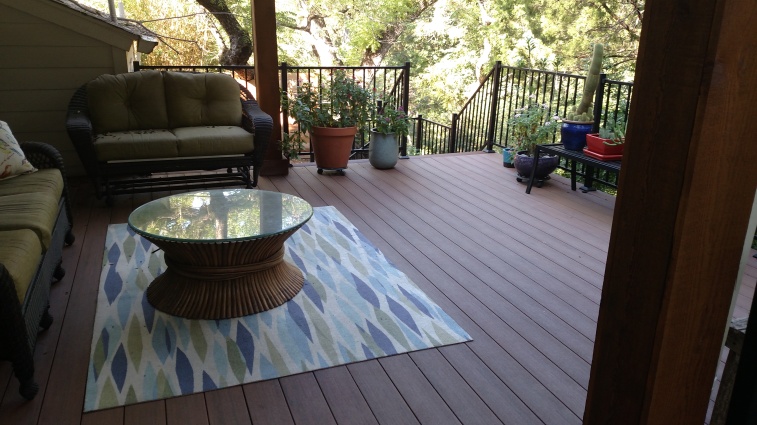 We had room to expand the depth of the deck by about four feet, which may not sound like a lot, but it does make the deck feel much more spacious. While a portion of the deck is covered for protection from sun and rain, a significant portion remains uncovered for those beautiful days when nothing will do but to sit out in the open. 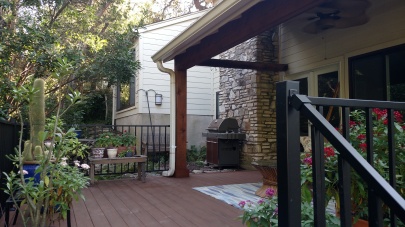 To support the porch cover, we added a new Glulam beam along its front edge. If you’re not familiar with Glulam beams, let’s just say this beam is a workhorse. Technically, Glulam is glued laminated timber. It’s “pound for pound” stronger than steel and much stronger than regular, comparably-sized lumber. And the adhesives used in the lamination process are moisture resistant.

We supported the new overhead beam with pressure-treated wood framing, and we wrapped the new support posts with cedar.  Instead of using lattice screen under the deck, we used Hardie skirt board for a cleaner, more streamlined appearance. We shifted the stairs away from the building to improve traffic flow to and from the deck.

The homeowner selected the Fortress rail system in the black sand color with 2″ posts because they allow more of the view of the sloping back yard. She plans to fill the hillside with landscaping, using only plant material native to Austin.

Are you thinking of replacing your aging deck or other outdoor living structures? If you want the job done professionally, contact Archadeck of Austin today at (512) 259-8282 or via email at jim.odom@archadeck.net to schedule a free design consultation. 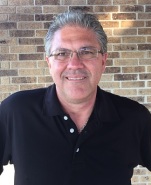