When premium deck builder Archadeck of Austin removes a deck that’s sick and replaces it with a healthy one, we feel satisfaction approaching that of a transplant surgeon. Of course, we don’t have to source our healthy decks from deck donors. We custom design and build each one from the ground up, including this deck replacement project in the Sun City community of Georgetown, Texas. 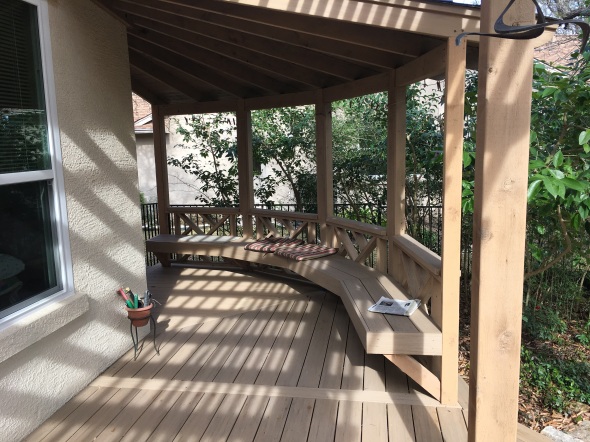 What’s unusual here is that the ground was part of the problem. It’s what made the first deck sick, so it was our job to ensure the new deck wouldn’t meet the same fate: mold, deterioration, and rot.

The clients’ original deck included two pergolas attached to a canopy with built-in benches. We had to remove the deck, benches and pergolas because they were deteriorating. The deck had been built so low-to-grade it had started sinking. 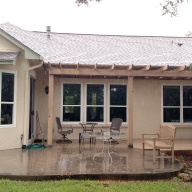 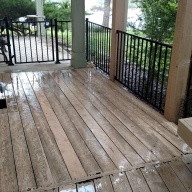 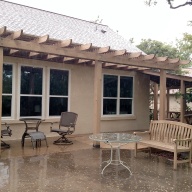 — Before: the existing deck was sinking due to rot.

When we took out the old deck, we found was it was rotting underneath. While pressure-treated pine is rated for ground contact, moisture can intervene and cause severe problems. This deck was in contact with the moist ground, hence our discovery of mold and degradation on the underside. In a case like this, a deck rots from the bottom up because the underside is not stained or sealed.

Knowing the ground under this deck stays moist, we took extra precautions to prevent the same damage from recurring. This illustrates one reason Archadeck of Austin has become such a trusted deck builder. We go the extra mile to make sure our projects last and look great as long as possible.

First, we excavated the soil under the deck’s location since we were building the new deck on the same moist spot where the prior deck had stood. Then we applied a 3″ gravel base before erecting the new deck. This system will allow more air flow under the deck and prevent the humidity level from rising enough for rot to occur.

We custom design every project we build because each client is unique and each home is unique. You could say it goes without saying, but not every deck contractor does this. For this Sun City project, we redesigned the space by installing a proper beam system across the posts supporting the pergolas. 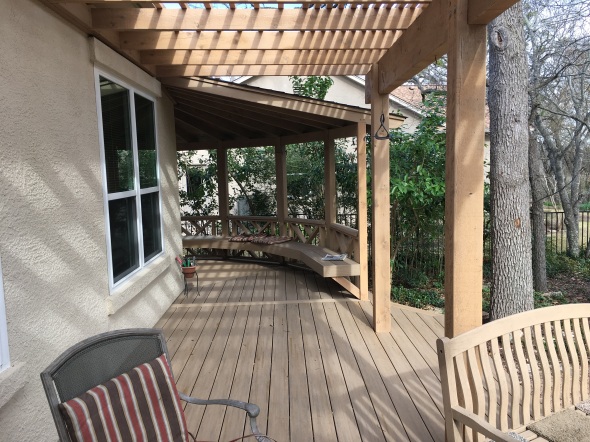 Another example of the custom work we did here is the spacing of the slats atop the pergola closest to the home. The homeowner had commented that the previous pergola blocked the light coming into the home through the windows. We were able to customize the new pergola to remedy that situation. 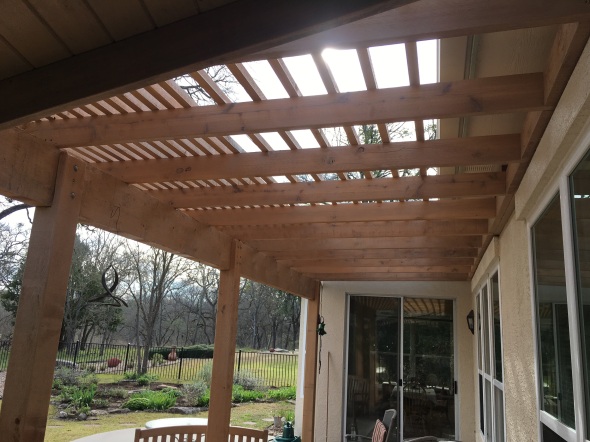 As you may know, adjusting the spacing between slats across the top of a pergola will affect how much shade the structure casts. For this Georgetown TX deck, pergola and bench project, we spaced the slats at the front of the pergola (farthest from the house) 3” apart for adequate shade. Toward the back of the pergola (nearest the windows), we spaced the slats every 6″ apart. The homeowners will enjoy shade on the deck where they want shade and light inside the home where they want more light – thanks to the new customized design.

The Details: Materials Used for This Deck and Pergola Project

For the deck’s surface and benches, the clients selected low-maintenance capped PVC decking from TimberTech AZEK’s Vintage collection in their weathered teak color. We rebuilt the twin pergolas – including posts, beams, slats and trusses – with cedar and applied a solid-color custom stain on all of the wood surfaces. We were able to retain the original deck railings, and we didn’t need to modify the roof structure for this project. 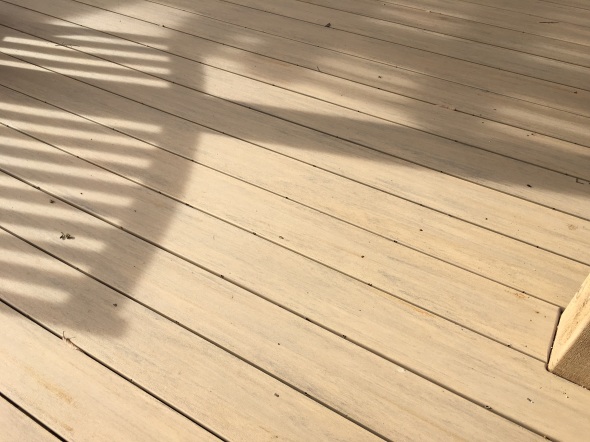 Not only was the new deck prepped thoroughly, it’s also solid, sound, more useful and beautiful! Can you make out the triangle dinner bell hanging from the pergola’s beam? These Sun City homeowners can enjoy dining on their deck safely once again.

Whether you want a new deck, replacement deck, custom pergola or more, Archadeck of Austin is ready to design and build the outdoor living space that will make your home complete. Contact us today at 512-259-8282 or via email at jim.odom@archadeck.net to schedule a free design consultation. 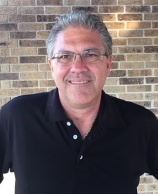 Here’s a tip: if you don’t have your aging deck replaced, you may never know your gazebo is in danger of collapsing. In North Austin, TX, the Sierra Arbor Estates deck project you see pictured here illustrates that point. 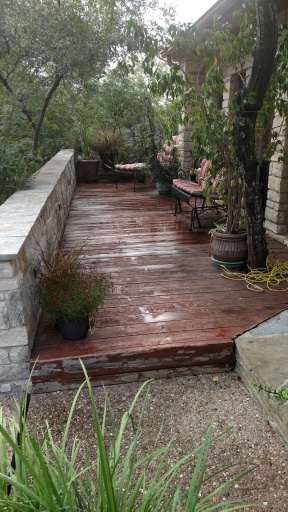 Before — aging deck in need of a refresh! 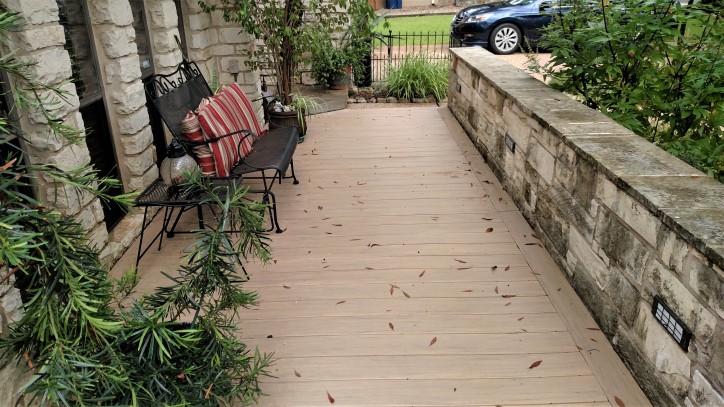 After Archadeck of Austin redecked this space with AZEK low-maintenance decking.

You’ve heard the expression, “One thing leads to another,” right? Sometimes homeowners are very, very glad one thing led to another when Archadeck of Austin comes around to create (or recreate) an outdoor living space. 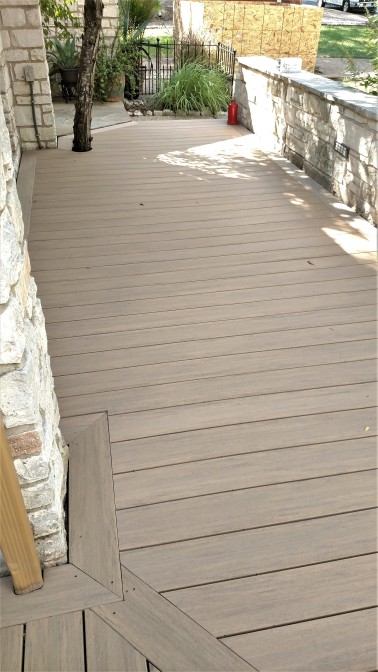 After Archadeck of Austin redecked and refreshed this space.

These clients wanted to replace their small deck that wraps around the side and back of their house, bordered by a charming stone wall. Made of wood, the deck had decayed. Time for a replacement.

Good fortune was on their side; the deck was a good candidate for redecking. Not all homeowners are aware that redecking is an option – and one that can save them money. Until we inspect your deck, we won’t know if redecking will work for your project, though.

Why is redecking possible? The sun’s UV rays cause a wooden deck’s surface to deteriorate over the years. Meanwhile, the deck’s substructure is protected from the sun and doesn’t suffer the same damage.

Before committing to redecking, Austin deck builder Archadeck of Austin will examine the support structure under your deck. If that structure is not compromised – if it’s still in good shape and can support a new deck surface for a good many years – we can use it again. That saves you some of the cost of materials and labor to build your new deck.

For their new deck surface, these homeowners chose AZEK synthetic decking boards in the popular weathered teak color from their Vintage Collection. With an AZEK deck, these homeowners will not have to worry about deterioration. These decking boards will resist splitting, cupping, splintering, blistering, peeling, flaking, cracking, rotting and structural damage from termites or fungal decay, and they are covered by an excellent manufacturer’s warranty.

So … about that gazebo we mentioned earlier. One end of this deck extends out to a gazebo in the back yard. We found that the gazebo hadn’t been built correctly. It was actually bowing, its support piers sinking into the ground because the concrete footers could not carry the weight of the gazebo. Honestly, this might have been a disaster in the making. 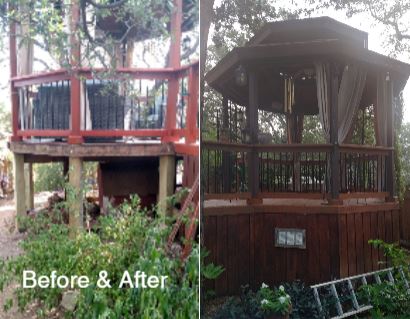 Archadeck of Austin to the rescue! We removed all the skirting and were able to pull out the original support posts and install a proper footing system under the gazebo. In that process we leveled the surface, so everything is level now.

Finally, we wrapped up this project by replacing about 15-20 feet of the clients’ wood fence, gates and hardware because the original fencing that bordered the yard had also seen better days. 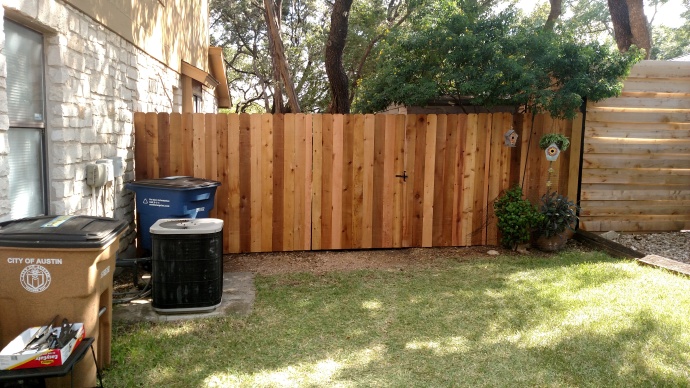 These North Austin homeowners are happy now that peace and safety have been restored to their pleasant getaway-at-home.

Could you save money by having your older deck redecked instead of replaced completely? Let Archadeck of Austin take a look at your deck to determine if it is a candidate for redecking. Call us today at 512-259-8282 or email us to schedule your free design consultation. 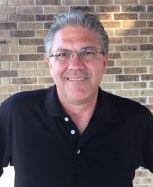 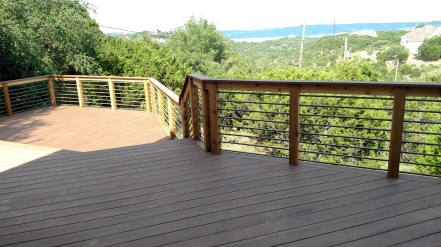 Sometimes, fixing one thing gives you the opportunity to fix a few others as well, taking you from good to GREAT! For example, take this deck in the Hudson Bend area on Lake Travis. The aging cedar deck was worn, weathered and due for replacement. Meanwhile … hmmm … how about eliminating those troublesome steps down from the breezeway to the deck.  And … hmmm … what if the new deck could hold a hot tub … and what about those old railings …? 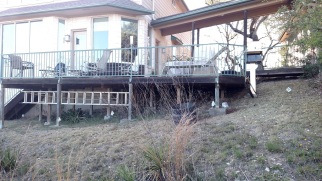 Here is a look at the deck before Archadeck of Austin began the project: 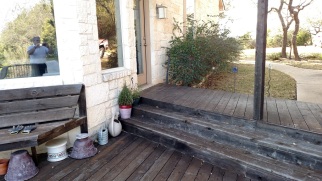 In the new deck design, we were able to match the deck’s elevation with that of the breezeway, not only eliminating the awkward “step down” but also making the space more open and functional. To bring the two surfaces to the same level, we raised the new deck up to the level of the breezeway. This adjustment makes the whole deck area look bigger because the breezeway and deck blend together now, creating one larger space. Also, the new deck design, level with the doors on the back of the house and level with the garage door, works much better for the homeowners.

Ready for the low-maintenance lifestyle, the homeowners chose AZEK composite decking in the mahogany color. We installed a triple parting board in the deck pattern, which is fairly unusual, because the client didn’t want any deck boards visibly meeting end-to-end. We engineered the design to use as many full pieces of the decking boards as possible. That’s the kind of challenge we enjoy tackling. 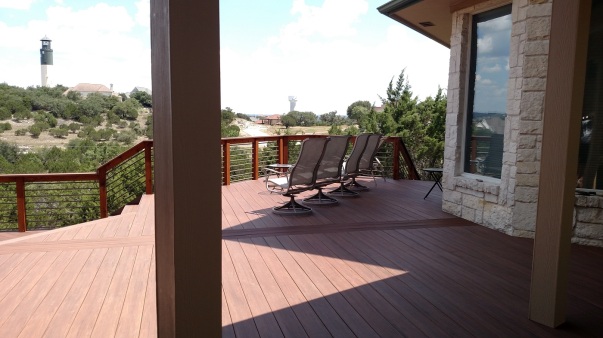 To make the deck sturdy enough to support a spa, we installed additional cross bracing and substructure underneath to accommodate the weight of it. No one will need to worry about the support there! 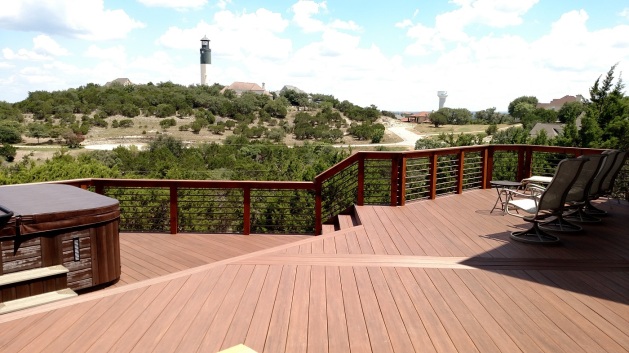 Finally, the sleek, new railing runs horizontally, giving the deck an urban edge. The homeowners wanted a low-profile railing in order to have full access to the spectacular view. 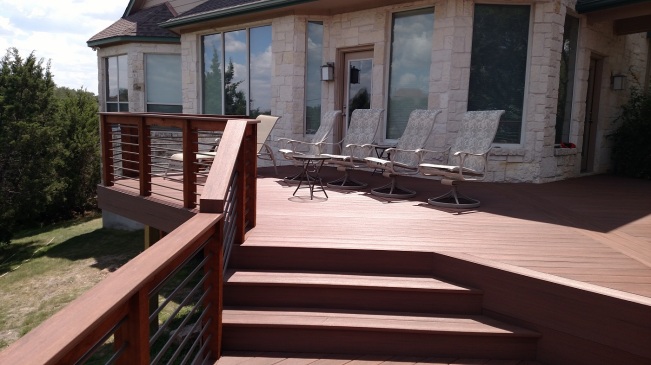 The new deck is beautiful and much more functional now that the breezeway and deck are on one level. The homeowners are quite pleased with the results and are asking, “Why did we wait so long to do this?” 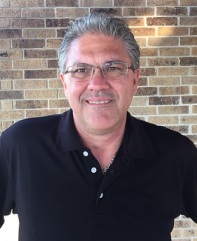 If you would like to learn more about updating your deck and gaining an outdoor living space that’s functionally better in the process, contact Archadeck of Austin today at (512) 259-8282 or via email at jim.odom@archadeck.net to schedule a free design consultation.