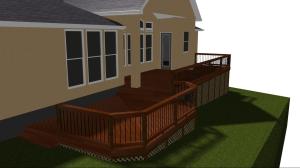 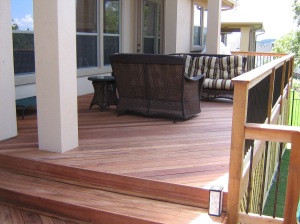 Archadeck of Austin Focus’ on the Fierce Exotic Beauty of Tigerwood

Old man Webster defines a tiger as a large, carnivorous, tawny-colored and black-striped feline. The definition of wood is the hard, fibrous substance composing the stem and branches of a tree or shrub. Now what do you think you get when you mix the two together? The result is Tigerwood, astronium lecointel, one of the finest quality hardwoods available.

Tigerwood is an exotic and extremely durable Brazilian hardwood. One of the most striking features of this wood is the unique golden-brown to reddish-brown coloring with exotic black and brown streaks, as fiercely beautiful as it’s namesake. Over time these hues will deepen adding warmth and more depth to the coloring.

Close up of Tigerwood

Not only coveted for it’s beauty, Tigerwood is naturally resistant to rot and decay. It also will not attract mold or fungus. This wonderfully resilient wood has a lifespan of over 25 years without preservatives. Archadeck of Austin is proud to be able to offer this product to you for your decking and outdoor structure needs. We have been working with this wonderful Brazilian hardwood for sometime now, with great results. We only see close similarities in working with Tigerwood as we do when we use Ipe. We are also excited about this product because of the “green” aspect of the harvesting.

Tigerwood is only harvested from responsibly managed forests so we can offer a truly renewable resource to you, the consumer.

If you would like to find out more about the many places you can use Tigerwood to beautify your surroundings or if you have already decided to use Tigerwood on your deck or upcoming outdoor endeavors, give us a call. We can help you grab the tiger by the tail and become king of your jungle.