A beefed-up deck design and gabled pergola make this SW Austin backyard a force to reckon with!

When Archadeck of Austin initially met with these SW Austin, TX, homeowners their backyard consisted of a multi-level cedar deck that needed work. Where many builders might have suggested the exiting deck be demolished and a new one built in its place, we looked past the deck’s cosmetic flaws to reveal a vision of what the deck could become. With a little ingenuity, TLC and elbow-grease, we were able to transform the space into a huge asset as opposed to an eyesore.

We began by “beefing up” the existing cedar deck to make it structurally sound and safe. We then power-washed the structure bringing it back to the bare wood to reveal the beautiful grains of the cedar. After these steps we then began the addition of the gabled pergola. 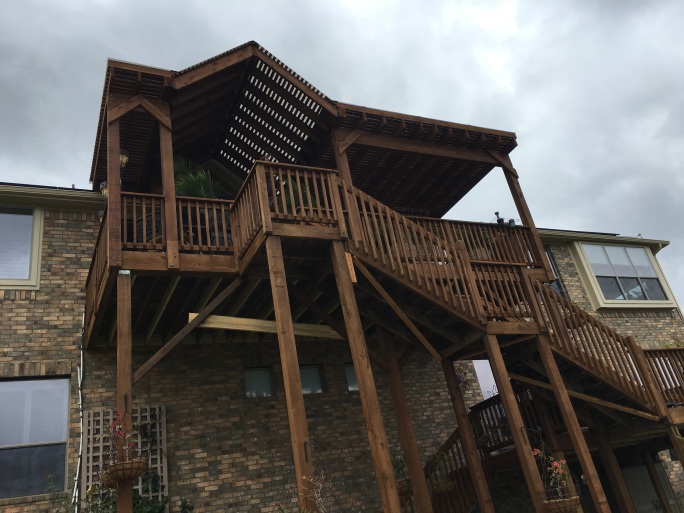 The pergola is designed for versatility and engineered to ensure clearance of the top floor window of the existing home. The addition not only increases the aesthetics of the entire structure, it also serves as a refuge from inclement weather and sun. We also installed a Polygal cover for added protection. Archadeck of Austin installed the pergola cover in an ingenious manner that allows rainwater to drain into and through the existing gutters of the home. Multiwall sheets, often referred to by the brand name of Polygal, are a structured sheet product available in double and triple layered configurations and manufactured in various colors and degrees of transparency. Polygal allows sunlight in but provides protection from unwanted elements, such as rain.

To finish off the project we stained the entire structure in a dark cedar/walnut hue for cohesiveness. These SW Austin homeowners are elated with their new, old deck, that has added tons of enjoyment and satisfaction to the time they spend outdoors!

This project serves as a great example of our innovative design process. In certain scenarios, we can make your existing or aging outdoor structure like new again — or even better! Contact Archadeck of Austin today to learn more about revitalizing your backyard today! You can reach us at (515) 259-8282 to schedule a free design consultation today or via email at jim.odom@archadeck.net.